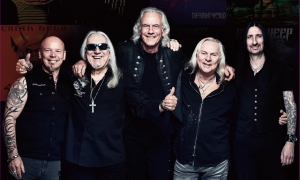 From the aptly titled 1970 debut album “Very ‘Eavy… Very ‘Umble” through to their last magnificent ...
plus

From the aptly titled 1970 debut album “Very ‘Eavy… Very ‘Umble” through to their last magnificent CD “Outsider”, and DVD extravaganza “Live at KOKO, London”, Uriah Heep has seen more ups and downs during its’ 50 year history than the biggest of all roller coasters. Uriah Heep have been responsible for the most elevated and intelligent use of vocals in a heavy metal context amongst the major bands inventing the genre in the 1970s. It is for this reason Heep were coined the Beach Boys of Heavy Metal, and their influence is there for all to see in other bands including the likes of Sweet and Queen. The band were also one of the forerunners with respect to the integration of Hammond organ, along with Mick’s signature wah- wah guitar, a combination that became the template for their sound. Success has followed the forging of such an audacious formula. Across 25 studio albums, along with myriad live releases and compilations, Uriah Heep have managed to sell 40 million records worldwide, four million of those in the US. Impressive American numbers, but that leaves 36 million records to be sold in the rest of the world, underscoring the fact that Uriah Heep have become, through their relentless dedication to touring, a truly global band, with particular success in Germany, Scandinavia, Japan, Eastern Europe and Russia, where they were the first Western rock band to play live in Moscow in December 1987 to 180,000 people.