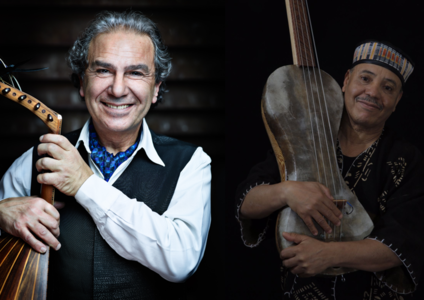 Lebanese musician and composer Rabih Abou-Khalil has established himself on the international scene through his exceptional mastery of the oud, the traditional ...
more

Lebanese musician and composer Rabih Abou-Khalil has established himself on the international scene through his exceptional mastery of the oud, the traditional Arab lute. A true pioneer of oriental jazz, he has become an important exponent of the fusion between oriental and western music. It is in contemporary jazz that he has built a very personal universe, sensual and meditative, while seeking to preserve the balance between emotion and formal experimentation.

For his latest album, The Flood and the Fate of the Fish, Rabih Abou-Khalil finally realized a project that was close to his heart: to gather around this record all his long-time colleagues who have become precious friends. He has thus created his most intimate album, on which he introduces the bass oud specially designed for him by the German luthier Robert Eibl, an instrument of imposing size and lower pitch than the usual oud, with a warm and particularly powerful sound.

Initiated very early by the Master Maâlem Ba Houmane, the author-composer, artist and performer Majid Bekkas has set a goal which he keeps the course as a great helmsman since 1974, when he bought his first Guembri.

Indeed, originally from the city of Zagora in Morocco, where desert music, Aqallal or Roukba rhythms have rocked his childhood, Majid Bekkas has always preciously kept a spirit of authenticity as to the preservation and safeguarding of Gnaoui music, whose secrets and intrinsic vision he has pierced.

Naturally, with the concern of preserving the essence and the original flavour in terms of spirituality, poetic mysticism, pentatonicism and traditional instruments, Majid Bekkas proceeds to fusions with nearby music such as the Blues, jazz or soul...

To carry out his projects, Majid Bekkas has collaborated with renowned musicians such as blues or jazzmen Archie Shepp, Louis Sclavis, Flavio Boltro, Klaus Doldinger and many others. A new dialogue was born: "African Gnaoua Blues".