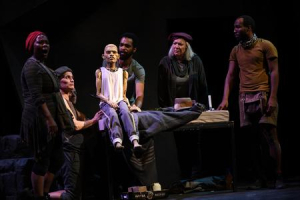 Introduction to the play by Janine Goedert 30 minutes before every performance ...
more

Following last season's Africa Focus and red bridge project, the ThĂ©Ăątres de la Ville continue to explore this continent, its political and cultural heritage, and rich creativity. Life & Times of Michael K is based on the novel by Nobel Prize-winning author J.M. Coetzee, chronicler of South Africa's transition from apartheid.

Michael K. is a man to whom life has not been kind. Born with a harelip, mocked and rejected, he leads a simple life as a gardener. When his mother wants to spend her final days on the distant farm where she grew up, Michael sets off to take her through a country shaken by civil war and finds strength in his own humanity and a profound connection to the earth.

The director is Lara Foot, known for the new South African writing she nurtures at Cape Town's acclaimed Baxter Theatre Centre, and for her own plays on such hard-hitting issues as child rape. This new production, commissioned by Festival Theater der Welt (DĂŒsseldorf) and co-produced by the ThĂ©Ăątres de la Ville, combines puppetry created by award-winning Handspring Puppet Company, vivid cinematic visuals, extraordinary music by Kyle Shepherd and live actors.