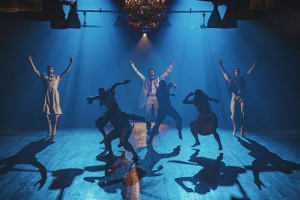 In 2018, Les Th├®├ótres de la Ville dedicated a week to Hofesh Shechter Company. This season, a year later than intended, the renowned choreographer returns with a new double bill, Double Murder, performed by his inimitable dancers and accompanied by his own epic score. This exciting programme aims to expose painful truths and press emotional buttons in a way that only Hofesh Shechter does.

Clowns is a satirical look at our growing indifference to violence. Originally created for Nederlands Dans Theater 1 and reworked for this bill, the macabre comedy begins as a genteel jig and descends into choreographed anarchy.

As an antidote to the toxic atmosphere of Clowns, Shechter's latest piece, The Fix, brings a tender energy to the stage. Here is a protective shield to guard against the chaos of the outside world and another chance for this electrifying company to shine.

"Shechter has a remarkable flair for inventive and visceral rhythms (not surprising, perhaps, given that he was a rock drummer) and a genius for unpredictable moves, for elongated, fluid phrasing, and for turning his ensemble into a single sensual being, part human, part animal.?

Developed in part at Banff Centre for Arts and Creativity

Hofesh Shechter Company benefits from the support of BNP Paribas Foundation for the development of its projects and is supported using public funding through Arts Council England.