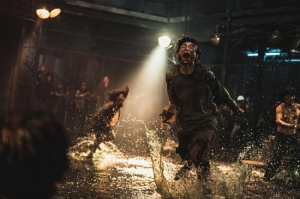 Four years after the zombie outbreak, South Korea has been overrun by zombies and quarantined from the rest of the world. A soldier and his team are given the mission to pick up an abandoned truck in the middle of Seoul with a time limit to escape the peninsula forever.

« While Train to Busan focused on a small group of survivors trapped on a bullet train during the start of a zombie outbreak, the current film takes place over the entire South Korean Peninsula, requiring greater imagination and more special effects. » (Variety)

« After the gunfire dies down, terror at times gives way to a melancholy that can be quite affecting even if the message remains familiar: We have met the zombie, and it is us. » (New York Times)