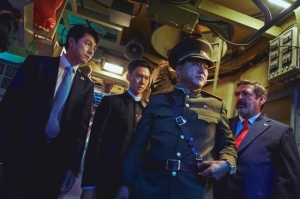 Steel Rain 2 depicts a crisis near the brink of war as the three leaders are kidnapped by a North Korean nuclear submarine in a coup d'état during a summit between the two Koreas and the United States.

« Simulations can help people imagine about a likely situation, and as a film director, I feel like it is my responsibility to provide simulations of viable paths for South Korea. » (Yang Woo-seok, réalisateur du film)