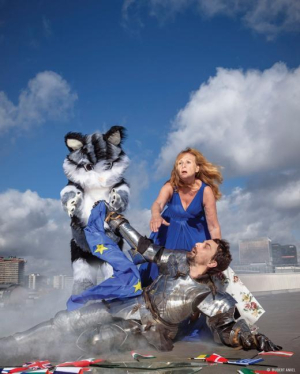 
At the juncture where stand-up, the absurd and existential drama meet, Cأ©dric Eeckhout obsessively singles out the similarities between his fate and that ...
more


At the juncture where stand-up, the absurd and existential drama meet, Cأ©dric Eeckhout obsessively singles out the similarities between his fate and that of the entire continent, politically and economically; he blends the great historical currents with his personal story. According to him, important dates of his life correspond strangely with important episodes in the history of United Europe.
On one hand we have his story, a forty year old actor looking for eternal love, marked from a young age by the separation of his Walloon mother and his Flemish father. And on the other hand, the European Union whose foundations could crack, threatened by the rise of nationalism.
During his performance, he addresses Europe's fragmentation and questions the ambivalent effects of Neoliberalism ? He reflects on his origins: he is the fruit of a union between someone from the north and someone from the south of Belgium, which after 18 years resulted in divorce. Will the European Union enjoy a better fate? Presenting himself as a 21st century errant armour-clad medieval knight, he is joined in his quest by his mom and his cat Jأ©sus.
Together they went to the Netherlands, Luxembourg, Sweden and Hungary, but also Flanders and Wallonia, sharing his reflections on family and Europe. They interviewed key people on the future of Europe; intellectuals, politicians, artists and also regular European citizens as well as members of his own family.
The Quest is the first theatre show of the week-long "Focus Europe" programme. Following Monday's performance, the audience is invited to a post-show discussion on current European themes.