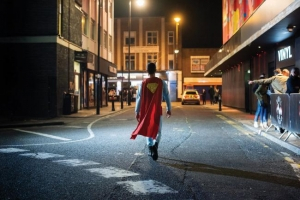 
One pub, eight blokes, a stacked jukebox and a load of pints. It was always going to kick off.
Twenty-five years after legendary dance ...
more


One pub, eight blokes, a stacked jukebox and a load of pints. It was always going to kick off.
Twenty-five years after legendary dance iconoclast Lloyd Newson (DV8) first dragged British pub culture kicking and yelling onto the stage, Rambert and Sadler's Wells present Newson's reworking of this landmark physical-theatre production.
As pertinent now as it was when first staged in 1995, the production lifts the lid on "the straitjacket of what's deemed to be masculine" (The Observer), examining the terrors and tenderness of beer-soaked testosterone.
"Violent, ugly, politically incorrect and hilarious" (The Australian), Enter Achilles toured 18 countries and was made into a TV film winning many accolades including an International Emmy and Prix Italia. It now returns to the stage with a new cast, selected by Newson, in his first-ever collaboration with another company, the world-renowned Rambert.
ô£ A rare, rich, devastating, triumphant work of art ... Dramatic coherence, human integrity, irresistible visual power, were all there in the most outstanding work I have seen all year. Daily Telegraph (UK), Ismene Brown
ô£ Remarkably clever and disturbing ? It is excellently danced, imaginatively conceived ?  Sunday Telegraph
ô£ Lloyd Newson's powerful and spectacular new work, Enter Achilles, is about violence and vulnerability of manliness ? funny, moving, disturbing. Sunday Times (UK)