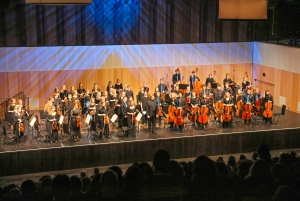 
"He enchanted me, I cannot deny it, in a way that had been unknown to me until now" was how Robert Schumann described his impressions of Frédéric Chopin's piano playing. The virtuoso thrilled his audience with his pianistic art, first in his Polish native country and later in Paris, where he spent the second half of his life. The pianist SoRyang will interpret Chopin's second piano concerto - a brilliant virtuoso concerto of the High Romantic period - as part of her 2022 spring tour. Chopin's music will be framed by two of the rightly most popular string works in the concert repertoire: the concert opens with Benjamin Britten's delightful Simple Symphony, for which he drew from his own youthful works for piano and voice. From the fresh and cheerful melodies he created a work that accompanies us in a hop-skip through Britten's childhood and youth. The programme with the Deutsche Streicherphilharmonie conducted by Wolfgang Hentrich concludes with Antonín Dvorak's String Serenade in E major; when Johannes Brahms recommended the somewhat younger Dvorak to his publisher, the latter presented his String Serenade after the Slavonic Dances and won the hearts of the audience with these and other works. The airy melodies, the love for the Bohemian homeland and Dvorak's inimitably friendly tone make the work a springtime experience each and every time.