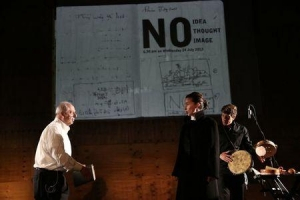 Making use of Schwitters' original Ursonate, Kentridge's piece is part performance, part lecture, part symphony. Watching it however, can also make it ...
more

Making use of Schwitters' original Ursonate, Kentridge's piece is part performance, part lecture, part symphony. Watching it however, can also make it seem as if it is none of these things. Backed by projection, Kentridge stands at a podium. He opens a book and behind him, a book opens as well. This is the last time the performance takes the shape of a conventional lecture. From the opening line: "Fumms bö wö tää zää Uu, pögiff, kwii Ee?, he launches into a symphony of audio-visual performance. Kentridge is backed by stop-motion visual works of his own making, some echoing the words and phrases he is uttering, and others filling in for the gaps in our understanding. Gibberish becomes debate while body language - the slight wag of a finger or the outward extension of the palms - helps form the argument. This builds up to a frenzy before reaching the cadenza - a magnificent collapse of rhyme and reason - orchestrated by New York soprano Ariadne Greif and dancer Peter Kuit. Amidst the noise, the chaos, and the explosions, conclusions are reached, or abandoned, before being revived anew. More polished than vintage Dada performances, Kentridge's Ursonate nonetheless pays these homage by demonstrating how helpful the language of absurdism can still be in addressing a world that makes no sense. This event has been carried over from the 20-21 red bridge project in which William Kentridge was the artist in spotlight and is part of the rainy days festival of contemporary music led by the Philharmonie.

William Kentridge's Ursonate was commissioned by the Performa Biennial and premiered at the Harlem Parish in New York City as part of the Performa 17 Festival.