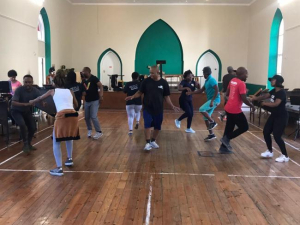 Introduction to the play 30 minutes before every performance (EN).
more

Introduction to the play 30 minutes before every performance (EN).

Scott Joplin was the "King of Ragtime?, mixing up African-American and European styles. Yet it wasn't until 1972, more than 50 years after his death, that his opera Treemonisha received its first full production. It was an immediate hit and earnt Joplin a posthumous Pulitzer Prize for its powerful themes of the right to education for African Americans and the rights of women.

Following their sellout season with A Man of Good Hope in 2018, the exuberant South African ensemble Isango returns to Luxembourg with this revival. Set up in 2000 by British director Mark Dornford-May and South African performer Pauline Malefane, Isango draws on the musical and acting talent of Cape Town's townships to create critically acclaimed productions, including The Magic Flute. They bring with Treemonisha promise of "a new and different sound-world? that is still "from the same solar system as Joplin's imagined world?.