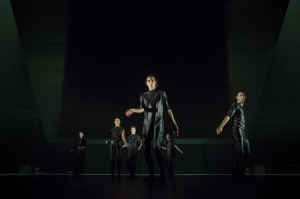 The cutting-edge choreography of Christos Papadopoulos has made his name known across Europe and the UK, beyond his Greek home. Now, ...
more

The cutting-edge choreography of Christos Papadopoulos has made his name known across Europe and the UK, beyond his Greek home. Now, as part of this season's Greek Focus, he makes his Luxembourg debut.

His vibrating body works are a result of his constant enquiry into perception: what is it that has the power to change what we see and to what extent are we failing to see? Inspired while driving at night and listening to music, he was struck by how different genres, whether classical or traditional Greek music, made the landscape seem different. He noticed the brain's imaginative role in perception and its ability to turn something ordinary into something beautiful.

In Larsen C, his latest work, he asks whether a slight change in a familiar rhythm or a tiny shift of body movement can alter our understanding of what we see. With a contemporary soundtrack by fellow countryman Giorgos Poulios.

In collaboration with Département du Val-de-Marne, as part of the creation residency aid, the Lavanderia a Vapore choreographic residencies projects