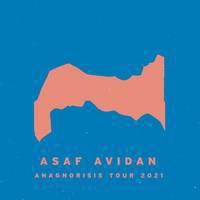 New date: 06.03.2022
The show of ASAF AVIDAN initially scheduled for the 29th of March 2021 has been rescheduled to the 6th of March 2022. All tickets bought remain valid for the new date. We thank you for your understanding and hope to see you back soon at the Rockhal!
Asaf Avidan's 7th album Anagnorisis is a literary term, coined by Aristotle, for that sudden moment of revelation of a character. That moment, which through the unveiling of a previously hidden element of a story's plot, the character is confronted by his or her true identity. Transcending from ignorance into knowledge.
After a 10-year non-stop touring regimen, Asaf, approaching his 40th birthday, decided to take "at least one year off the road?, and reflect upon his life, career and art. To experience time and space in a different way than during those years of endless movement and changing views. To live differently and to write differently.The setting he chose was an old farmhouse in Italy that had been turned into a recording studio/writers-retreat. A lot of green fields and olives, a lot of blue skies, and a lot of quiet and seclusion.The process would prove to be very different from the past. While previous albums such as Different Pulses or The Reckoning were penned down ina matter of weeks, something was changing now. It seemed like the presence of nature and silence around him were seeping into his art.
Things started to take time. They were cut, groomed, thrown away, replanted. Months went by and the songs were still slowly mutating."I remember learning to cut olive branches to prepare the trees for next year. I was astonished to see how much of the tree had to be cut in order to help it live better. Local farmers showed me that by cutting many of the branches, more air was reaching the inside of the tree, more sun, making it stronger and more resilient to parasites and disease. I tried to do the same with my songs. Cut, trim and remove big parts for the song to use its energy to grow stronger roots and a stronger structure. Take time and let the song grow naturally.?The result is remarkably felt. Every song seems to echo with deep roots that search inwards and with structures that seem groomed and precise.