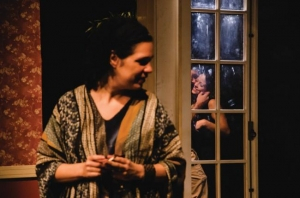 What if they went to Moscow?


"To Moscow! To Moscow"! Who doesn't remember the famous longing call that the three sisters keep repeating in Chekhov's famous play. For these young women ...
more


"To Moscow! To Moscow"! Who doesn't remember the famous longing call that the three sisters keep repeating in Chekhov's famous play. For these young women forever restrained by provincial routine, the name of the big city resonates like the hope of a real life. From far away Rio de Janeiro, Christiane Jatahy has heard their cry and decided to grant their wish: what if they really went to Moscow?
In doing so, the Brazilian director has changed the perspective of the three characters and catapulted the play into the here and now by adding a fourth actor: the cameraman. What if they went to Moscow? is as much a play as it is a film since alongside the theatre production a live-edited film version of the play is projected in a second adjacent space. In this theatre-cinema experience, one half of the audience will see the three sisters followed by the cameraman whilst the other half will watch the filmed version that explores the desire to leave city and country, to change one's trajectory in life by emigrating. Both performances, which form part of one single evening, create two startlingly different perspectives of the same work and are to be watched back to back, an exercise which alters the respective playing fields of theatre and cinema.
What Christiane Jatahy explores in all her productions are the boundaries, the limits, the points of convergence and difference between reality and fiction, between theatre and cinema, whilst constantly questioning the relationship between the actor and the audience.
What if they went to Moscow? is the third production of the season to investigate the relationship between cinema and theatre, after Joueurs Mao II Les Noms by Julien Gosselin and Arctique by Anne-Cécile Vandalem. Shoot the cameraman by Cie AWA, a dance production with live camera on stage, will close this exploration in June.