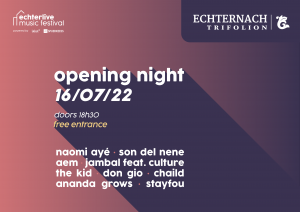 Naomi Ayé Vajdovics Suarez is a Cuban-Hungarian pianist, singer, songwriter, and composer. She was born in Luxembourg in 2008 and began learning to play the piano when she was five years old. At the age of seven Naomi was able to sing and play the piano at the same time and soon she wrote her first musical composition finding a new way of expressing herself. She was one of the finalists of the 7th season of The Voice kids France 2020.

AEM is an electronic dream pop project started in 2018 by Luxembourg based singer/songwriter Ema. Influenced by all kinds of artists, genres and subgenres, AEM is most importantly always evolving and looking for something new. She always has the ability to enchant crowds during her performances!

Jambal is a young jazz band that's coming up fast with a freshly released EP that gets to the point. The quartet let their melodic sketches, compositional snippets, and outstanding chord grids collide freely. On stage, the musicians - Ben Bley, Arthur Clees, Maxime Igisch and Luca Garofalo exudes a rare freshness and insouciance and offer a sophisticated and embodied performance that transports the audience into a musical universe that borrows from both UK jazz and ethnic jazz.

Culture the Kid (Matteo Griz Wolff) places himself among the new-school Hip-Hop stream but tries to keep close ties to the roots of what the genre stands for. By retaining an organic sound to his beats, Culture tries to assure this meddling of times and styles. Recently, his original song 'Glass Walls' contained in his first mixtape "General Culture", was a great success and managed to land in the local 'Eldoradio Chartbreaker' and to remain in the first place on the station's charts for two weeks.

Originally from Italy, it was in Luxembourg that the future Don Gio made his first forays into music. First hip-hop, then reggae. Determined to put what he does on record, he releases two EPs, which allow him to play many concerts. On his new album, he navigates between reggae and "conscious" rap. A good word that he intends to sow, again and again, in his wake.

The project CHAiLD was officially created in September 2017 by Adriano Lopes Da Silva, a young and uprising singer-songwriter based in Liverpool, originally from Luxembourg. CHAiLD comes up with a very own pleasing style of Pop. His song Sick

Ananda Grows is a musical embrace of your inner worlds and a musical journey by the exceptional producer and musician Nick Sauber. The music on his opus incorporates a variety of different influences, you can find a wide range of music styles, such as jazz fusion/nu jazz, experimental, urban r'n'b, chill hop and electronica. The focus is on unique, lovingly created and selected sounds. These individuals are embedded in mostly improvised structures and find their ways into one harmonic unity.

Stayfou (Skinny J, Turnup Tun, Tommek, Ragga, Luk and Mäddy) is a Luxembourgish artist collective that focuses mainly on hip hop and rap. From modern, crunchy beats to old school classic sounds, their music has something for everyone.