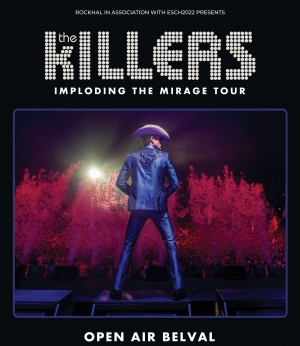 The Killers are a Las Vegas-based four-piece formed in 2002, featuring singer/keyboardist Brandon Flowers, drummer Ronnie Vannucci, guitarist Dave Keuning, and bassist Mark Stoermer. The band has sold over 25 million albums globally and received multiple Grammy nominations, AMA nominations, MTV VMA’s, and NME Awards. Their first album, 2004’s Hot Fuss, was released to worldwide acclaim and contained the singles “Mr. Brightside”, “Somebody Told Me”, and “All These Things That I’ve Done” After touring for two years, they worked with producers Alan Moulder and Flood on the 2006 follow-up Sam’s Town, spawning hits “When You Were Young” and “Read My Mind.” After the release of the compilation Sawdust in 2007, the band shared 2008’s Day & Age, anchored by the year’s top-streaming song “Human.” The release of Battle Born in 2012 saw them touring new countries, as well as perform at Wembley Stadium before releasing their 2013 ”best of” collection, Direct Hits. The band earned their first #1 on the US Billboard Top 200 as well as #1s in the U.K., Mexico, & Australia with their 2017 album Wonderful Wonderful. In 2020, they released Imploding The Mirage, earning them their 6th Top 10 on the US Billboard Top 200, another #1 in Australia, and a 5th #1 in Ireland. In August 2021, the band released Pressure Machine, a character-driven document of life in small-town America inspired by Flowers’ upbringing in Utah, making it their seventh consecutive #1 in the UK (Flowers’ 9th UK #1 overall).